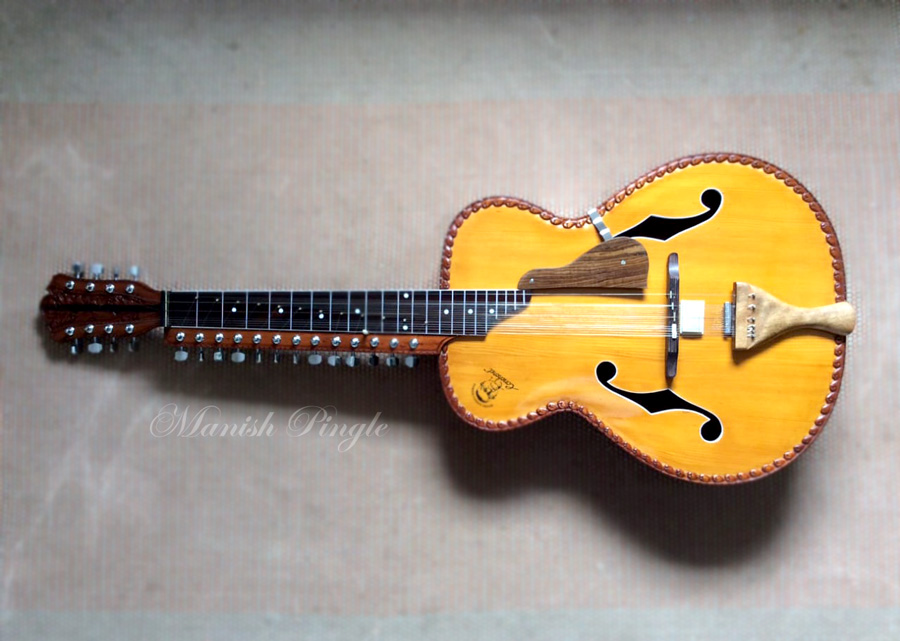 Indian slide guitar was first introduced to Indian classical music by Pandit Brijbhushan Kabra in the early sixties.  His instrument was a Gibson Super 400, modified with a drone string and a high nut to raise the strings off the fretboard like a lap steel. Seated on the floor in the traditional style of Indian musicians, Kabra played his guitar horizontally, using a fingerstyle plucking technique and a short steel bar to contact the strings. His approach set the standard for virtually all Indian slide guitarists.. His instrument gained more popularity with his album, CALL OF THE VALLEY, which was released in 1967 and was a huge success around the globe, where he played with the Santoor maestro Pt Shivkumar Sharma and the flute maestro Pt Hariprasad Chaurasia.

Pt Vishwamohan Bhatt, modified this instrument further and added sympathetic strings (Taraf strings) underneath the main melody strings. He decided to rename this instrument as Mohan Veena, and took it to a greater height of popularity, by winning the most prestigious Grammy Award in 1994. He developed a fascinating right hand picking style, where he uses his index and middle finger for the faster runs (taans), and thumb for the drone strings.

Debashish Bhattacharya, from Kolkota plays hollow neck guitars. His guitars have different string arrangements. He has three different names for his guitars, Chaturangi, Gandharvi and Anandi.

Though I play the Indian slide guitar with drone and sympathetic strings, I felt a strong need to introduce a different right hand picking style, by using index finger and thumb on my main melody strings. It gave me a tremendous advantage for speed. I also experimented by adding an extra base string, which helps me attain an additional half lower octave.